The fluid that is pumped into the inflatable penile implant cylinders is stored in a reservoir next to the bladder where it can't be felt.

When non-surgical ED treatments fail or are not well tolerated, penile implants remain an excellent option to restore the ability to have sexual intercourse. Penile implants are manufactured by Boston Scientific, formerly American Medical Systems (AMS) and Coloplast, formerly Mentor. Inflatable penile implants are by far the most commonly used type of penile implant for erectile dysfunction (ED).  However, there are also other types – a malleable (semi-rigid) and Ambicor (2-piece).

A malleable penile prosthesis is a  non-inflatable penile implant that has 2 separate cylinders that are always semi-rigid.; These penis implants never change in size and are similar in some ways to a goose neck lamp as the neck of the lamp maintains a certain position when not manipulated, but can be bent or straightened. The malleable penile implant is generally maintained in a downward position, and then bent into an upward position prior to intercourse. The advantage of the malleable penile prosthesis is the technical ease of insertion, and ease of use. The disadvantages of the malleable penile implants include the semi-rigid appearance of the penis at all times, and an increased risk of discomfort and erosion. Semi-rigid devices are infrequently selected at this time.  However, some patients prefer these devices and they are offered at the Center for Reconstructive Urology.

A 2-piece penile implant is available from Boston Scientific (AMS) and this is called the Ambicor Penile Prosthesis. This device does not contain a reservoir, only the cylinders and a pump. As the pump is used, fluid is transferred between the pump and the cylinders. The advantage is that there is no need to place a separate reservoir. In some cases, prior abdominal, hernia, vascular, or reconstructive surgery represents a contraindication to reservoir placement, and we then use an Ambicor penile implant in these cases. The disadvantage of the Ambicor penile prosthesis is that the device, compared to the 3-piece inflatable penile prosthesis (that has a separate reservoir), is that it is less soft when flaccid and possibly (but not always) less rigid when firm.

The most commonly used penile implants, also called a penile prosthesis, is a 3-piece device consisting of cylinders that are placed within the penis, a pump that is placed under the skin of the scrotum, and a reservoir that is placed adjacent to the bladder. One could argue that the 2 cylinders should be counted as 2 pieces, but they are considered as one piece. Options include the Boston Scientific (AMS) 700CX or LGX penile prosthesis and the Titan penile implant, manufactured by Coloplast.

The 3-piece silicone penile implants are connected by tubing that transfer’s fluid between the components. When a man wants to have penile rigidity, he squeezes the pump several times, and this causes a transfer of fluid from the reservoir to the cylinders leading to penile rigidity. The pump has a valve or button. When this is depressed, the fluid is then transferred back from the cylinders to the reservoir. The Coloplast and Boston Scientific (AMS) inflatable penile implants are similar in overall appearance and function. However, there are differences. The Titan products are silicone penile implants with cylinders composed of a solid silicone elastomer called Bioflex. This features a hydrophilic coating, meaning that when immersed in fluid containing antibiotics prior to placement, the antibiotics will stick to the exterior of the cylinders, a feature that may prevent infections. The Boston Scientific (AMS) products are coated with antibiotics, and this is called Inhibizone.

It can be difficult to for a man considering the different types of penile implants to determine which product is better. Urologists who publish or give lectures on the topic of penile implants are often paid consultants with one company and tend to support that particular penile implant type. These relationships must be mentioned when manuscripts are submitted for publication in Urology journals or abstracts are submitted for presentation at Urology meeting such as the Annual Meeting of the American Urological Association. However, these relationships that create the potential for bias are seldom disclosed on the internet. The Center for Reconstructive Urology and Dr. Gelman have never accepted any monetary funding from an implant manufacturer.  Disclosures of these relationships can be found here:

To find out more about penile implant, please visit the other sub-sections of our website. Although our website provides educational information, the decision to have a penile implant or which type of penile implant is an individual decision best made after a patient is seen and examined and counseled in-person.  Dr. Gelman and The Center for Reconstructive Surgery welcome new patients. 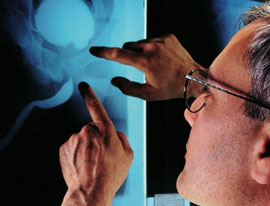 Do you have a question or concern about treatment? Dr. Gelman is happy to answer your questions.